Andy’s friends Dave “The Gruber” Allen (a.k.a. “The Naked Trucker”) and David Koechner (a.k.a. “T-Bones”) recruited him to join their band The Dick-Around Gang on drums (joining Tommy Chan on guitar and J.P. Fitting on bass).  The band performed live shows at venues like Largo and the Troubador in Los Angeles, as well as shows in New York and Las Vegas. Comedy Central picked up the show for 8 episodes. Guest stars included Jack Black, Will Ferrell and Steve Carrell.  More recently, Andy has toured with David Koechner, performing at comedy clubs and colleges where audiences are treated to such classics as “Daddy” and “Two Dollars and a Hand Job.” Andy also continues to write and perform with Dave Allen in The Thrilling Adventure Show , Clowntown City Limits and Two-Headed Dog. 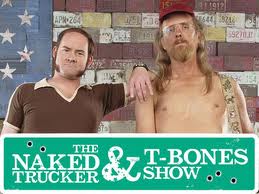